After I finished writing my 500 page book, A Taste of Jesus, I was pretty sure I was done writing for awhile. It had been an incredibly enjoyable experience for sure, but it had also sucked a lot of time, energy, and life out of me. But then, not too long after releasing it, something odd happened, as I point out in my book Alien Theology.

I woke up one Sunday before church from a dream in which I scripted out the basic idea behind this book [Alien Theology] and laid out a bunch of the chapters and their direction…. As I laid in bed in those early hours, I mapped out all I could remember from the dream and began to edit my new blueprint of a book…. I won’t necessarily claim any kind of Godly direction on this book. I’ve taken enough interest in cosmology the last few years and pondered C.S. Lewis’ statements on aliens enough that it’s entirely possible my subconscious just pieced the idea together. But whether it was God or my subconscious, I was moved from that dream to dive into the writing process.

If I remember right, I blazed through writing that book in about a month or two—which isn’t that crazy because it’s pretty short—but it still surprised me. I had a good amount of passion bottled up in me to write on a theme that could easily crush any future writing I did—not to mention effect my reputation as a pastor and as a person in general. In the book I never actually say aliens are real, rather, I just contemplate the possibility and the theological thoughts behind the possibility. But from the title alone, many might just assume I was crazy and see me as that classic aliens meme. 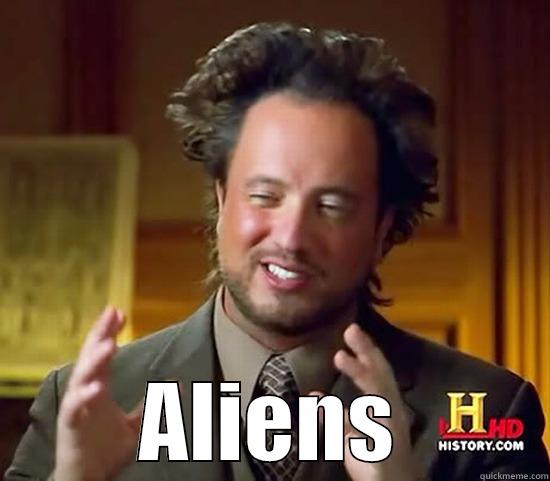 On top of that fear, I had to write about scientific topics that have been controversial in the church for some time, like evolution—a topic that I had always been afraid of speaking on because I don’t have a problem with the idea (though like many in the church, I used to). But not only would I be offending those of a more traditional mindset, but I’d also be offending those of a more enlightened mindset with my talk of things like demons. Taking all of these topics and wrapping it up with a neat little bow seemed pretty unlikely, if not impossible.

And I don’t know, maybe the book has had negative effects I’m not aware of, but today I’m happy with it. While hardly anyone has read it (welcome to the life of the indie-creative), the few that have seem to have enjoyed it. One recent review brought a smile to my face:

A voice of reason for today’s Christian community. This book is a thoughtful and honest take on the unnecessarily fabricated “God vs. Science” debate. Not only does Bradley offer reasonable and insightful commentary on contemporary scientific issues that Christians today need to take to heart, but he also offers fresh perspectives, ideas, and questions for us all to consider. Definitely worth a listen/read!

And then yesterday, this constructive 5-star review came in:

Remarkable and insightful work. This book starts slow. I almost put it down, but then the narrative finishes and the insights begin. it was extremely well thought out. I had actually discussed the idea with some friends before reading the book and was delighted to see that the author had the same insights. It is balanced and not hyper-legalistic but very well grounded and biblically balanced. I don’t think its finished though. there are some things he did not cover and i look foward to a reading more about what he thinks.

What really made me happy about both of these reviews is that rather than view me as the alien-meme-guy, readers were finding the book to be thoughtful, insightful, and biblically balanced. What a relief.

I’ll note one final thing before I wrap up this post that again makes me wonder if that dream I had a couple of years ago was a call from God or just my subconscious: It’s not that I no longer care about science or anything like that, but that book felt like an emptying of myself on that topic. I was soaking up books, podcasts and articles on science pretty often before writing that book, but after finishing it, I haven’t studied it that much. It’s really quite bizarre. It’s as though that short book embodied a phase of my life that needed to happen—as though I had learned enough for a non-scientist to offer some theological parameters for engaging and admiring God’s science for the average layperson. It’s not necessarily a book about what to think about God, science and aliens, but how to think about God, science and aliens.

Really, I think the true discerning factor as to the source of the dream will be if the book goes on to help more people. And that we’ll see with time. If you yourself have any interest in it, you can check it out on Kindle Unlimited, Kindle, Audible, or grab a physical copy on Amazon.